Thanksgiving is almost upon us, and one of the many things I am thankful for is not having to wait tables anymore. (Especially ON Thanksgiving.)

4. St. Patrick’s Day at the Stockyard (four million sweaty, slobbering Brighton townies who have been drinking since 9 am and are too wasted to see, speak, or get out of my way, but not too wasted to dance to that traditional Irish favorite “Brown-Eyed Girl.”)

There’s a new girl in town!

1. Mother’s Day (Restaurant full of people who hate their mothers and mothers who hate their children, trying, sometimes successfully, not to make a scene.)

1a. While not technically a holiday, I once worked a Christmas party for 60 DMV employees, but I still can’t talk about it.

On the other hand, to be fair and balanced, rehearsal dinners and New Year’s Eve are fun to work because everyone is happy, drunk, and most importantly, generous.

Do you have a shitty job you are thankful is in the past? Let me know!

Thanks for reading and have a great day!

What is this? Back in the day, I had a blog. It’s long been abandoned, but I think the world deserves to hear my wisdom anew.  And I was a helluva lot crankier back then, so if you have a moment, why not go back in time and give 2005 Kate a hug.

Okay, fine, so maybe I kind of love it (but don’t tell anyone). It does, however, raise some questions, which I addressed in this post from 2006.

The Nazis in the Sound of Music have to be the dumbest Nazis ever. Do you mean to tell me they posted guards all over the auditorium during the festival but no one was watching the door? And didn’t Max get punished for so obviously helping the von Trapps escape? And why weren’t the nuns immediately taken to a concentration camp after they dismantled the Nazis’ cars? The only Nazi who showed any initiative was Rolf, and it was probably just because Liesl refused to, shall we say, “deliver his telegram” in the gazebo that night.

You want it, put a ring on it.

Sixteen going on Seventeen ain’t getting any younger, babe.

Lessons I’ve learned from the Sound of Music

-The Nazis in Salzburg in September 1939 just didn’t care
-When you’re sixteen going on seventeen, it’s best not to get involved with Nazi youth because they will turn you in at the end of the movie unless you put out
-Governesses are man-stealing bitches (just ask the Baroness)
-While a stiff drink and a lap dance may be among the captain’s favorite things, they are not part of the song
-No one, and I mean no one, knows how to solve a problem like Maria
-The hills may be alive with the sound of music, but it could also be those mushrooms you ate

Perhaps not my best effort, but something to think about while you’re digesting turkey this year.

Thanks for reading and have a wonderful Monday.

What is this? Back in the day, I had a blog. It’s long been abandoned, but I think the world deserves to hear my wisdom anew.  And I was also a lot crankier back then, so if you have a moment, why not go back in time and give 2006 Kate a hug.

A long time ago in a galaxy far, far away (Boston), my bosses at bostonherald.com sent me to Disney World for an assignment and it was my first (and hopefully last) encounter with Mouse Culture. You can read the original post here.

Diary of a Misanthrope at Disney

After speaking with the front desk to find out if my room is ready, I am told to have a “magical day.”

Call off fanny-pack count because I can’t count that high.

We are at the new “Wishes” fireworks show. The name “Wishes” reminds me of the dumbest senior quote to ever grace the pages of my high school yearbook: “if wishes were horses, dreamers would ride.” If wishes were tequila, I’d have a much better disposition.

While wandering around the park, I find a street modeled after New York City. I propose a Boston-themed street with potholes, triple-parked cars and the occasional shooting of a teenager at the T-station.

If it were really the “happiest place on earth” there’d be fewer kids and more dogs.

I dig the show tunes.

Let’s see. “Health.” Okay, there is a spa. That could be construed as healthy. “History.” If you consider a fake reproduction of upstate New York circa 1870 in the middle of 2004 central Florida historical, then yes, there is history. “Horses.” Hmmm. No horses. No horse races. No betting. They should at least throw in an OTB.

We are gathered for a “surprise announcement” via a live feed from Disneyland in California.

To celebrate Disneyland’s 50th anniversary (for some reason called “The Happiest Homecoming on Earth”), Disney World will import attractions from other Disney parks.

From Tokyo, they will introduce a show called “Cinderellabration,” a story featuring Cinderella and the other Disney princesses. Euro-Disney will contribute its “Lights, Motors, Action! Extreme Stunt Show,” which consists of a bunch of cars going really fast and crashing. I suggest they combine the two and call it the “The Last Days of Princess Di.”

Art Linkletter, who is 93, appears on stage in California to tell a rambling story about Walt Disney and his God complex…I mean his “vision.” If they wheel out Christopher Reeve, I’m leaving. 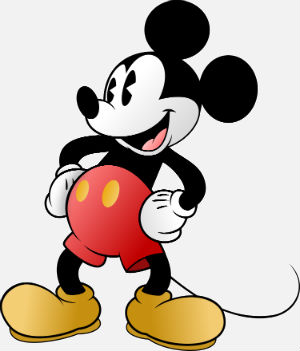 Back at my hotel:

My faith in (in)humanity is restored. Today on Oprah: that guy in Syracuse who locked women in his basement dungeon.

The local T.V. station shows a hilarious commercial for something called “Granny Nannies.”

Item in the news: For the second day in a row, a local high school is under lockdown because someone brought in a weapon.

By the pool, there’s a man in a Speedo eating a banana. I don’t know why I think that’s funny.

At an International Media event, we get a VIP viewing of the Siege of Fallujah, I mean, the “Illuminations” fireworks show.

At Epcot, you can safely say, “I see London, I see France…” and not have to finish the sentence with “underpants.”

I’ve seen two couples (so far) wearing Mickey/Minnie wedding attire, which consists of white mouse ears with an attached veil (for her), and a top hat (for him). This makes me very sad.

Made-up, but possibly true, statistic: Per square foot, there are more strollers here than anywhere else in the world.

Behind the scenes, Animal Kingdom employees ride around the park on blue Schwinns.

I saw a huge container with the sign: “Manure Only.”

The animals are housed in giant buildings with signs that say “Elephant/Building 15” and “White Rhino/Building 16.” I wonder if they have to pass drug tests.

One of the employees working at Tusker House Restaurant looks just like the “O-Face Guy” from Office Space.

The Tree of Life is fake.

What the F, Tree of Life?

There are entirely too many people here.

Chef Mickey’s at The Contemporary Resort:

As I am surrounded by approximately one million children all hopped up on candy and Mickey Mouse, I wonder idly about the alcoholism rate among Disney employees.

Speaking of Mickey, I don’t like his attitude. The scene at Chef Mickey’s was just like the show “The Restaurant,” where everyone is all, “Where’s Rocco, where’s Rocco?” Like Rocco, Mickey sashays in when he feels like it and expects everyone to make a big deal over him. Whatever.

We are in a boat, in the middle of the Seven Seas Lagoon, where we are watching the “Electrical Water Pageant.” Imagine your neighbor’s light-sculpture Christmas decorations, but instead of reindeer, it’s dolphins and fish and alligators. Then it turns patriotic with stars and stripes and flags, which totally reminds me of “Red, White and Blaine!” from the movie “Waiting for Guffman.”

Christopher Guest needs to make a movie about theme parks.

The “Wishes” fireworks display. Again. By this point I’m wishing, fervently, that the boat would capsize.

To the parents of the child who screamed at the top of his lungs from North Carolina to Logan Airport: please don’t fly ever again.

Where I spent most of my free time

So there you have it. 2004’s unhappiest person on earth visited the “happiest” place on earth and lived to tell about it. (You can read the fruits of my Disney labors here if you’re so inclined.)

Do you have a terrifying vacation story?

Thanks for reading and have a great day!

What is this? Back in the day, I had a blog. It’s long been abandoned, but I think the world deserves to hear my wisdom anew. I was also a lot crankier back then, so if you have a moment, why not go back in time and give 2005 Kate a hug.

This was one of my earliest posts.

There are 8 million people in the naked city and every single one of them is in my way. Between the Christmas tourists lollygagging along Sixth Avenue like it was ribbon night at the State Fair and the packs of Bosnian refugees hijacking my subway in their frenzy to see the “The Gates,” I’m surprised I haven’t found myself a bell tower and a rifle yet. The good news is, Christmas is gone for another nine months, and the Christos have gone back to violating European cities with their saffron bedsheets of Satan.

However. I live on the Upper West Side and that means one thing: strollers. Everywhere. On the sidewalks. At Filene’s Basement. In the grocery store. Have you been to a grocery store in New York? It’s hard enough to carry a can of soup down the aisle without having to turn sideways; trying to get by when there’s a stroller THE SIZE OF A HUMMER in the way, with the mom standing there yapping on her cell phone, oblivious to the fact I need to get by so I can go home and eat my soup so my low blood sugar doesn’t cause me to BEAT TO HER TO DEATH, is virtually impossible.

And the strollers are not only gigantic, they are more pimped-out than anything you’d see on Monster Garage. I’m schlepping my stuff around in a tote bag like a jerk, while the stroller jockeys are strapping lumber from Home Depot onto their roof racks.

I haven’t even gotten to the part where stroller = high probability of screaming baby, although with all the groceries, dry cleaning, furniture from Pottery Barn, there’s no room for a baby. I saw a woman carrying her baby in a kangaroo pouch while pushing a plasma TV in a stroller the other day.

When did this happen? I don’t even remember having a stroller when I was a kid. My parents stuck me in a cardboard box and dragged me along behind them with a length of clothesline. I think I turned out fine.

So yeah. Maybe a little bitter, but bitter adds dimension, right? We can’t ALL be Oprah.

In any case, I hope you enjoyed this trip back in time. I will be posting some old shit every week (and some new shit tomorrow), so come back soon!

What is this? Back in the day, I had a blog. It’s long been abandoned, but I think the world deserves to hear my wisdom anew. This was one of my first posts and I believe the message is still relevant for 2015. (Click here for the original post.) I was also a lot crankier back then, so if you have a moment, why not go back in time and give 2005 Kate a hug.